When Darkness Falls
In the year 1964 when the Beatles released Can't Buy Me Love and two men were the last to be executed in England, Walter Banister was sent to the country. His mother was ill again and his father thought it would be a good idea.
Oakley was a quaint little village and aunt Beryl and uncle Reg were kindly and obliging hosts. They owned the post office and lived beside it in a modest house. They had never had children of their own and had always had affection for their bright nephew. The thirteen-year-old boy settled in quickly and made a new best friend in Peter Price. His parents owned the fish and chip shop and they lived above it. The two boys hit it off immediately.
Walter Banister was a pretty youth with a mop of brown hair and steel blue eyes. He had a lurid imagination and a morbid fascination with vampires and werewolves and a penchant for scaring his schoolmates with stories of the undead. Now he faced the prospect of spending the summer in a little village he knew nothing about and he wasn't very happy about it. The village sounded like it was full of another kind of living dead.
Everyone in Oakley seemed to welcome Banister. Everyone it seemed except the strange woman who owned the little pie shop at the end of the street. She appeared to regard the boy with disdain and Walter Banister had taken a violent dislike to her the moment he first saw her.
Ada Winson had a face like thunder as she stood glaring at him from inside her pie shop. She had dark hair scraped in a bun, pointy features, black eyes and a pinched mouth. All she needed was a broom stick to complete the picture. Her cold eyes seemed to bore holes into his soul.

"Witch and a bitch" Banister muttered under his breath.
Walter often caught her staring impassively at him from her shop. Aunt Beryl pronounced Mrs Winson's pies as “the best in all of England”. And they certainly looked enticing. There were endless rows of glistening pies, pasties and sausage rolls gleaming in the light. You could only what lay within that golden pastry. Ada Winson was a widow and lived alone in a small cottage. Her husband Arnold had been dead for ten years.
“She came home to find her husband with his head in the stove” Peter Price informed Walter one day “But I bet she killed him and put the old man in one of her pies”
Banister shuddered.

Then the boy laughed but Walter did not join him.
Apparently there had been a spate of unexplained deaths over the years and none of the cases had ever been solved. Peter Price calculated that the deaths had occurred since the opening of Mrs. Winson's shop.

"I bet that old cow did it" Peter Price retorted.
Every time Walter walked by the shop he wondered what lurked within the pies and pasties. At night he dreamt that Mrs Winson was digging up bodies in the graveyard and putting them in her pies.
One day Walter came home to find Mrs Winson in the kitchen with his aunt and uncle. He froze at the door.
“Look what Mrs Winson has bought us!” aunt Beryl cried with obvious delight, motioning to the pie on the table.
Mrs Winson smiled thinly at the boy. She was stick thin and very pale.
“Come in and say hello to the nice lady” uncle Reg said and beckoned him.
But Walter suddenly felt sick was fright and pelted out.
That evening Banister scooped his piece of the pie into a handkerchief and threw it out in the bin.
Three days later Walter observed from his bedroom window as Mrs Winson opened shop early one morning. A small bird suddenly dropped from the tree and lay dying on the pavement. Banister watched as Mrs Winson pondered the wounded creature for several moments. Then she took a brick and crushed the felled bird. Walter fell back from the window in horror.
A couple of weeks later Walter and Peter decided to buy a bag of sweets so Price put his bicycle against the wall outside Mrs. Winson's shop. Within minutes the widow appeared like a black crow.
“Would you kindly remove that from there” Mrs Winson snapped.
“It's a free country!” Peter Price retorted.
“Horrible boy. Do as I say!”
Peter Price blew her a giant raspberry.
“Get away with you. You wicked little boy!”
She was hovering over them with a menacing look in her eyes as if she was about to strike. Both boys stepped back in fright and Peter Price begrudgingly complied.
For the remainder of the summer Banister deliberately avoided Mrs. Winson.
Three weeks before he was due to return home, Peter Price suddenly vanished. Walter was horrified and joined the search party as villagers joined forces to look for the missing teenage boy. But there was no trace of Peter Price. His parents were absolutely devastated and clung to each other for comfort.
It was highly suspicious and Walter Banister was convinced that Mrs. Winson must be involved. Peter Price had always said she was a murderess and a cannibal. One afternoon Bannister entered her shop determined to confront her.
Mrs Winson emerged from the shadows looking paler and thinner than ever. Her eyes were black as coal.
“Welcome, Walter” Mrs Winson cried. She grinned showing sharp white teeth. “Would you like one of my pies? I have one especially for you”
“What happened to Peter?” Walter demanded with as much bravado as he could muster. He was shaking with fright but determined not to show it.
“I only wish I knew” Mrs Winson replied
“It's you!”
“Me?”
“You killed him and -”
“Put him in one of my pies?”
Mrs Winson threw back her head and laughed. It echoed all around them. Walter Banister suddenly felt ashamed of himself. She was standing very close to him now. Her teeth were very sharp and her nails were long.
“What a vivid imagination you have” Mrs Winson said. She took a pie and presented it to him. “Here, take a bite”
Mrs Winson moved in very close now.
“Don't be afraid, I'm not going to eat you”
Walter Banister tossed the pie out of her hand.
“You evil bitch!”
Then he ran out of the shop as her laughter echoed everywhere and seemed to reverberate as if it were coming out of the bowels of hell itself.

Walter was pale shaking with fright and when they asked him what was the matter, he could not answer. He slept fitfully that night and jumped up in bed, convinced that Mrs Winson had entered his room and was hovering over his bed.
Two days later Walter Banister watched from the back of the car as it pulled out of the village at Mrs Winson in her shop. She had a strange smile on her thin face.
Walter Banister never found out what had happened to his friend but five days after his return to Camden Town a pie was delivered to the house with the name “Peter” etched in puff pastry on top.

A Message For You 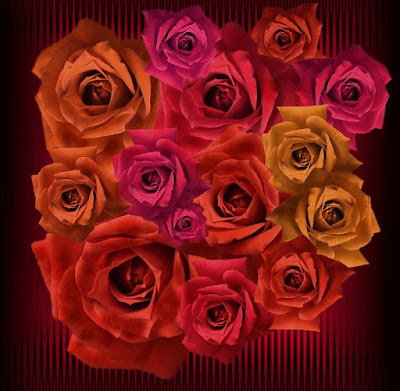 Firstly, I just want to say a heartfelt thank you to all of you for reading my work and posting such lovely messages.

I am sure you'll be pleased to know that I am working on my first book which is gradually unfolding. It will be a book of five short stories with the life of Heather West at the very heart of the book. Each story deals with very powerful themes and the reader will go on a journey with the characters featured.

Thank you for joining me here and I look forward to exploring characters and their story with you in my book.

In the meantime, do take a look at The Needle Pulls The Thread and enjoy it again.

Love and Peace to you on your journey.